Monday, November 27th is the Book Birthday for five Entangled historical novels. Among them is my debut novel, Tying the Scot. In a gesture of solidarity toward my fellow Release Sisters (does that sound weird?), I’ve read the other four and I am so incredibly proud to be featured among these talented writers. 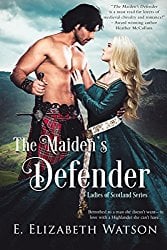 Jennifer: I fell in love with your hero, Teàrlach, the perfect match for heroine, Madeline Crawford. What was your inspiration for creating the fourth son?

E. Elizabeth: I’m not really sure, but I wanted Teàrlach to be a man without any claim to a lairdship. With mortality rates being higher in the Medieval period, I wanted there to be little doubt that he would ever be laird of his clan, and so, he’d need a lot of brothers and some nephews in front of him. I wanted Madeline to fall for a man based on who he was, not marry someone because of their rank, which would have been the expected practice of the time. I have four sons of my own and their dynamic is entertaining to watch, as is it wonderful to see their relationships develop over time, so I suppose creating heroines and heroes who have lots of brothers is a common theme in my writing.

Jennifer: The Maiden’s Defender is the second novel in your Ladies of Scotland series. The first, An Earl for the Archeress, features Madeline’s sister, Mariel Crawford. Who will we meet in your next book?

E. Elizabeth: Poor Rabbie MacGregor, Teàrlach’s feral-looking brother, is hung out to dry at the end of The Maiden’s Defender. He’s a restless man, often misunderstood because of his shaved head and scarification, but he’s a good man who deserves a story, which I’m currently writing! I’ll introduce a new set of sisters, too.

I’ll be running a GIVEAWAY of The Maiden’s Defender on my Author Facebook Page, Jennifer Trethewey Romance, this coming Monday, Nov 20th and choosing a winner at noon on Tuesday, Nov 21st. I encourage you to check out these books by the five Book Release Sisters published in Entangled’s Amara imprint:

Tying the Scot by Jennifer Trethewey

The Lady and Mr. Jones by Alyssa Alexander